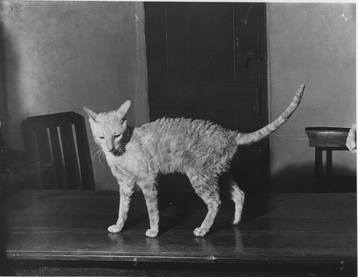 Kallibunker
The Cornish Rex is a study in curves, with curly coat, curved profile, large expressive ears, and Whippetlike arched bodies. In spite of their sophisticated, elegant appearance, they are anything but cool, aloof, or dignified. They are affectionate, people-oriented, and active cats whose kitten-like antics last a lifetime. Favorite Cornish Rex games are fetch and catch, and they may even use their agile paws to pick up and toss small objects. Belying its fragile appearance, the Cornish Rex is a very sturdy breed. They are perfect pets for the owner who wants active cats to participate in family life.

The most striking feature of the breed is its very noticeably curly coat. Ideally falling in marcel waves, the coat is very short, lies close to the body, and is incredibly soft to the touch, prompting comparisons to cut velvet, karakul lamb, rabbit fur, or silk. In fact, nothing else feels exactly like a Cornish Rex coat.

In addition to the coat, this breed is remarkable for its distinct egg-shaped head with high cheekbones, hollow cheeks, a strongly bridged Roman nose, and large ears set high on the head. The body has been compared to that of a Whippet, with its arched back, barrel chest, small waist, and very fine, long legs. In spite of their dainty appearance, these small to medium sized cats are extremely hard-bodied and muscular, using their welldeveloped hips and long legs for fast starts and stops, quick turns, and high jumps.

Because of the Cornish Rex’s short, fine textured coat, some people mistakenly believe that they do not shed and are hypoallergenic. In fact, all cats are constantly renewing their coats as old hairs are replaced by new ones. By comparison to some other breeds, Cornish Rex shedding is minimal, but they do indeed shed.


​Although otherworldly in appearance, Cornish Rex cats originated in Cornwall, England, where one first appeared in a litter of barn cats in 1950. A cream-colored male, named Kallibunker, was covered in tight rows of tiny curls, giving him the appearance of a miniature lamb. As he grew, his differences from his littermates became more dramatic: a slender, fine-boned body standing on long legs, a narrow head, enormous “bat ears,” and a long, whippy tail. Kallibunker was a genuine mutation and was bred back to his mother to produce curly kittens. The curly coated cats were bred with Burmese, Siamese, and British domestic shorthair cats, resulting in a broad genetic base for the Cornish Rex breed and the knowledge that the gene was recessive. 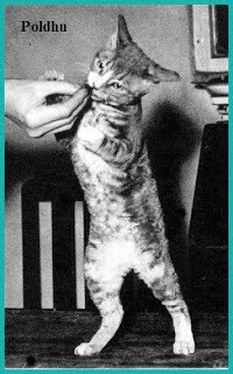 General Description
The energetic and elegant Cornish Rex bounces through life and into your heart with undaunted enthusiasm. They are a natural breed originating from a mutation first recognized in England. Often referred to as the Greyhound of the cat world because of their long legged body complete with tuck-up, the Cornish Rex is easily recognizable by its wavy marceled coat. These curls go from their eyebrows to their whiskers and all over their body. There is NO hypo-allergenic cat, but the Cornish is considered a good choice for people with allergies as they do not seem to aggravate them as much as other cats. Their large tall ears and soft, big oval eyes blend into their egg-shaped head giving them a wonderfully expressive appearance. Smart, social cats, they know their place...right in the middle of everything!


​History
The story of the Cornish Rex begins in Bodmin Moor, Cornwall. On July 21, 1950 a tortoiseshell cat named Serena, owned by Mrs. Nina Ennismore gave birth to a litter of five kittens. One red & white coloured kitten in this litter had an unusual curly coat. The kitten was named Kallibunker (Kalli) and was to become the founder of the Cornish Rex breed. Nina's veterinarian suggested she contact geneticist A C Jude. He advised she mate Kallibunker back to his mother. This breeding produced three kittens. One was a straight coated female the other two curly coated males. Sadly, one male died at 7 months of age, the second male named Poldhu (along with Kallibunker) went on to sire further litters. Due to the gene pool being very small in the 1950s-1960s the Cornish Rex was an endangered breed. They were out crossed to domestics as well as Siamese, Russian Blues, American Shorthairs, British Shorthairs and Havana Browns to create great genetic diversity and a strong, healthy foundation for the breed. In 1956, Life magazine published an article on the Cornish Rex that generated a lot of attention worldwide. The following year Frances Blancheri of California imported Lamorna Cove. She was pregnant by her father Poldhu at the time. She went on to have a litter of 4 kittens...the start of the Cornish Breed in North America.


Personality
The Cornish Rex has an outstanding enthusiastic personality. They are highly social cats, not at all reserved, liking to be right in the middle of everything and thrive on attention. They are extremely intelligent, very acrobatic & clownish, and retain their kitten-like personalities throughout their adult life. They are a very lively, energetic breed that loves to play and will entertain themselves for hours. One of their favorite games is Fetch, retrieving toys like a dog, and if no one is available...they will even throw the toy for themselves with their little paws that they use like hands. Cornish Rex love attention and make wonderful pets, although can be demanding at times. They do not like to be alone for long periods so it is a good idea for them to have a companion if the family works long hours. The Cornish is definitely a lap cat and ANY lap will do, they get along well with other animals and make an ideal children's pet. They are usually quiet, but can express themselves quite well with a pat on the cheek, a kiss on the cheek or a turned back & flip of the tail.


Traits
The Cornish Rex has a racy slender, body which stands tall on its legs. Do not be fooled though, while these cats appear fine boned and elegant they are actually hard bodied and muscular for all their dainty appearance. They have a natural arch to their back that matches a tuck-up to their waist that flows into a long tapering tail. The Cornish have dainty oval paws and tend to walk high on their nimble toes. Their head is often said to look like an egg on its side with high cheekbones. They have tall ears that sit high on their head, but not so high as to give it a donkey-like look. Cornish Rex have oval expressive eyes with a slight upward slant and a patrician roman nose.


Of course, the most unique feature of the Cornish Rex is their coat. Unlike most cats, Cornish coats do not have guard hairs and the hair lays in marcel waves that can be tight or loose--they are often compared to a washboard in appearance and to Chenille in touch with its incredibly soft and silky texture. The curls even extend to their whiskers, which are foreshortened and curled. They require little grooming, although they have a tendency to get greasy ears and toes. Females, on an average, weigh 5-7 pounds while males weigh 8-10 pounds. They come in all colors and patterns from pointed to solid to tabbies, with or without white. Their bodies often appear to be warmer to the touch, then the average cat and actually have a slightly higher than normal temperature. They love warm places, be it a heat vent, sunspot, warm lap or under the blankets in bed.